Tackling Climate Change on the Slope

A big landscape. An even bigger problem. Addressing climate change across the Yukon North Slope is no small feat, but it's an important part of our Council's work. Our shared responsibilities to conserve wildlife, their habitats, and traditional Inuvialuit use must include how climate change will shape all of these things.

There are some incredible research programs on the Yukon North Slope exploring how our warming planet is affecting the north. And, there are many keen Inuvialuit observing change in their own backyard. There is still a lot we don't know, though. In order to move forward, we need to know what we don't know. In advance of updating our research strategy, the Council worked with Round River Conservation Studies to identify key knowledge gaps when it comes to climate change on the Yukon North Slope. This report, Arctic Climate Change Research and Monitoring, will guide our Council's work in the coming years, but we're also hopeful that it will inform and inspire our partners and other researchers to build our collective knowledge, too.

The report touches on a few major topics:

Within each section of the report, we look at what has been done to date, some of the notable gaps, and some potential future research to address these unknowns. Below, we highlight some of the big takeaways for each section.

Importantly, this is not a comprehensive review of every ecological aspect of the Yukon North Slope. The focus is on key issues and species that have been identified by the Aklavik Hunters and Trappers Committee and in conversation with Aklavik community members. As the community closest to the Yukon North Slope, Aklavik has a special connection with and responsibility for this land. Further, work on the Yukon North Slope must be considered in the  context of the broader Inuvialuit Settlement Region, as well as informed by both the National Inuit Strategy on Research and the National Inuit Climate Change Strategy.

Inuvialuit use and knowledge of the Yukon North Slope are both well-established and well-documented. The new report compiles many of these existing studies. Now, the challenge is translating what we know into meaningful adaptions that support continued Inuvialuit use of the region. Through the management framework established under the Inuvialuit Final Agreement, and with guidance from initiatives from across Inuit Nunangat, there are many opportunities to amplify the mobilization of Inuvialuit knowledge and science to support continued Inuvialuit use of the Yukon North Slope. 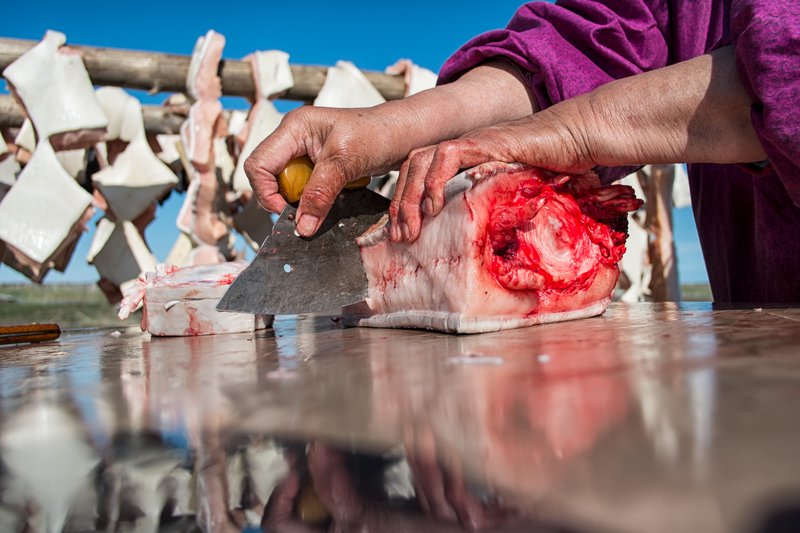 An important next step identified on this front is for increased focus on place-based needs and adaption measures. For example, there are a number of high-value cultural sites along the coast that continue to be used regularly by Inuvialuit families. Several of these places and their associated uses face site-specific climate-related problems, including erosion, flooding, and access issues. The mitigations for these threats will need to be specific to the location, the issues, and the individuals that use them.

Another critical next step is making research findings and monitoring outputs available to the people traveling on and using the Yukon North Slope. There is a clear safety component, both for sharing realtime data as well as traditional teachings for how to be safe on the land and water. In addition, though, getting information into the hands of folks that spend time on the Yukon North Slope is a critical part of climate adaptation as these are the people that are making management and stewardship decisions on the ground.

We are lucky in the Western Canadian Arctic to have the kind of regional data that allow for the modelling of expected patterns in climatic and vegetation shift, at least at a broad scale. This modelling has supported some of our recent work as a Council, in our forthcoming Wildlife Conservation and Management Plan and elsewhere. But, it doesn't give the whole picture, especially when it comes to the more specific changes occurring at the local scale.

The Yukon North Slope comprises a massive area, including a national and a territorial park. In some parts of the region, e.g. Herschel Island-Qikiqtaruk Territorial Park, monitoring vegetation change has a long history, with decades of data collection. Inuvialuit have also shared observations of changes to plant communities where they travel, harvest, and live. The tricky part is that the spatial coverage of Inuvialuit and science knowledge currently has limitations. There are still large areas and diverse ecosystems where we don't have a great sense of how plants are reacting to climate change. 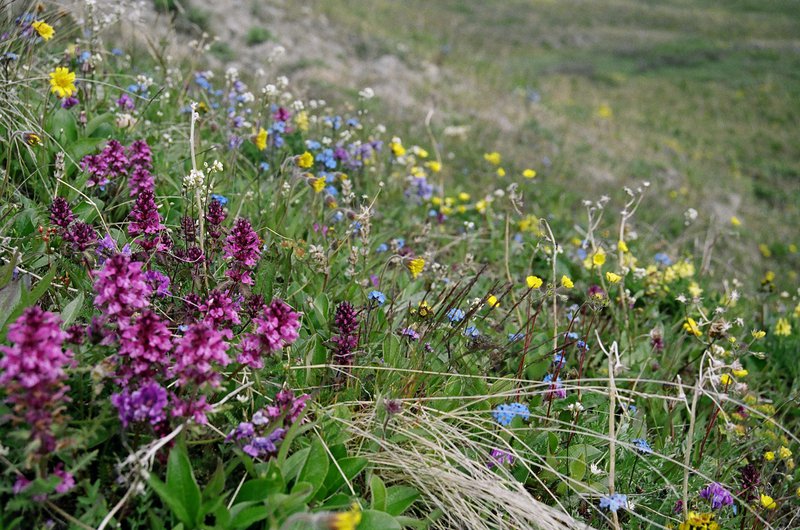 To date, relatively little active monitoring and documentation of change have occurred in Aullaviat/Auguniarvik, compared with the two parks. This is a notable gap. In addition to extending the reach of science knowledge, the creation of monitoring sites closer to areas of frequent Inuvialuit land-use would support the inclusion of Inuvialuit observation and knowledge in monitoring vegetation change.

Inuvialuit land-users rely on local landscapes for berry harvesting and other food and medicinal plant gathering. Given the detailed interaction between land-users and local landscapes, continuing to support processes for communicating land-user observation of vegetation change to scientists may create a system for guiding future research efforts and informing land-user adaptation. Engaging Inuvialuit land-users in the selection of future research sites would also ensure that scientific monitoring occurs in areas of concern for land-users and contributes information that is relevant to traditional use.

Other vegetation-related recommendations include expanding the coverage of remote vegetation change monitoring, ecosystem vulnerability assessment, and evaluating the monitoring outputs from neighbouring regions for useful application on the Yukon North Slope.

Fish and Wildlife Research and Vulnerability

There is a vast and growing body of pan-arctic research on the complex responses of wildlife to climate change. The Yukon North Slope is no exception. There have been limitations, though.

Northern research is often an expensive undertaking. It's not realistic to expect in-depth studies of the effects of climate change for all or even many of the animals that call the Yukon North Slope home. As such, one of the recommendations is to conduct a baseline climate change vulnerability assessment for a broad suite of culturally and ecologically important species. The depth of these assessments would, of course, be influenced by the data available to inform them. Regardless, this kind of tool would provide a way to prioritize conservation effects in a world of finite capacity and resources. 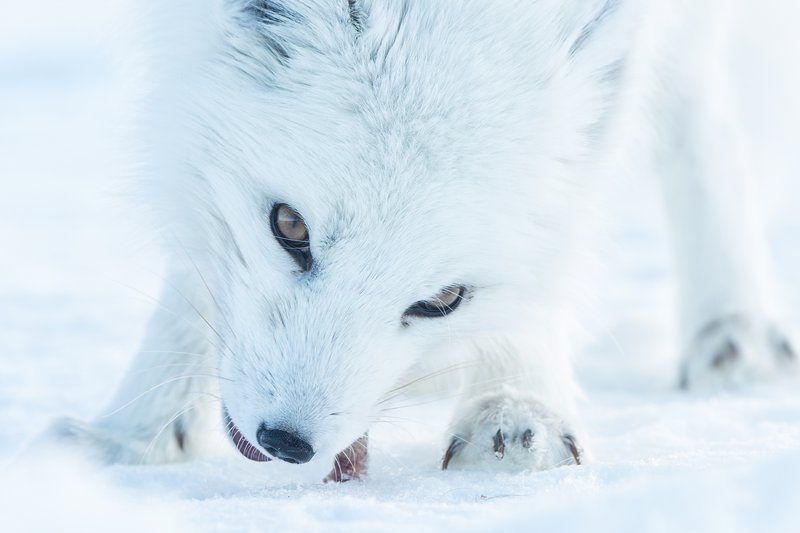 Extending the ecological integrity monitoring that occurs in Ivvavik and Herschel Island-Qikiqtaruk into Aullaviat/Auguniarvik would also be beneficial, increasing our knowledge of wildlife-climate change interactions in an area of high Inuvialuit use. Further, the report emphasizes the role of Inuvialuit in monitoring the effects of climate change on wildlife. Whether that role is direct, as on-the-land guardians, or as experts providing advice and guidance in the development of new models, Inuvialuit must be at the forefront of this work.

Another suggestion to address both knowledge gaps and the high cost of Arctic research is to explore and expand the use of new technologies to automate data collection (e.g. camera traps) and gather data remotely (e.g. drones and satellite imagery).

Arctic landscapes are undergoing dramatic changes as ground ice thaws, sea levels rise, and precipitation patterns change. Across the Circumpolar North, research increasingly highlights both the wide-ranging occurrence of these perturbations, as well as gaps in fully understanding the extent to which erosion, permafrost thaw, and changing watercourse features alter local ecosystems. Regionally, the Western Canadian Arctic is experiencing intensive permafrost slumping and rapid coastal erosion, both of which occur to some degree along the Yukon North Slope. These changes have potential to impact land-use and in many cases, Inuvialuit land-users have already faced disruptions to travel, fishing, and wildlife harvesting as a result of a transformed landscape.

Fortunately, considerable work has been completed on the Yukon North Slope to understand the extent of erosion to date and its trajectory over the coming years. Unfortunately, we now know that climate change is having (and will continue to have) a catastrophic effect on many coast cultural sites. Addressing the documentation and potential loss of cultural sites, especially outside of the two parks, is identified as a notable gap under this theme.

Shoreline erosion also has the potential to alter near shore marine food webs, which may affect Inuvialuit subsistence harvest to an extent that is not yet fully understood. Shoreline erosion is responsible for a large input of terrestrial carbon into marine food webs, and nearshore sampling in the Beaufort Sea has shown the potential influence of this input on assimilation of carbon in arctic cod. Additionally, sedimentation of coastal waters may disrupt Dolly Varden (locally referred to as char) migration corridors. The direct impact of sediment and nutrient loading on Inuvialuit subsistence harvesting is still unclear; however, given the significant transformation occurring along near shore ecosystems and the importance of the harvesting that occurs here, this is a priority research gap. 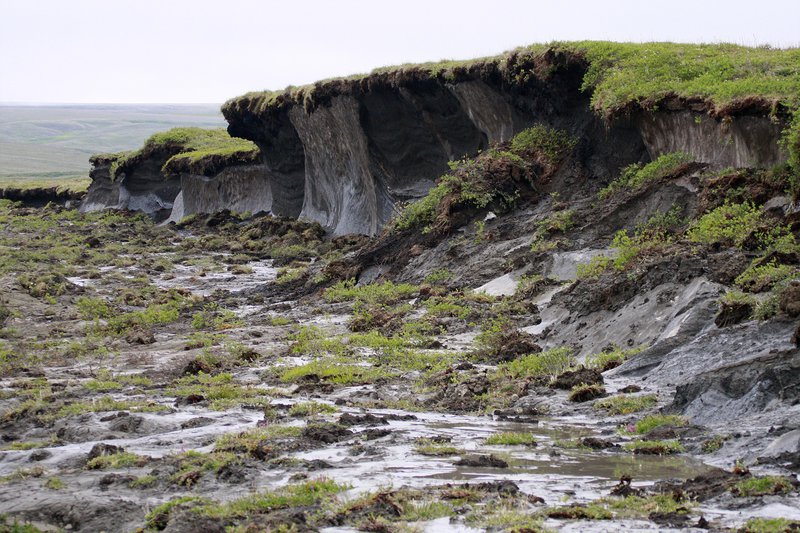 While inland permafrost slumping does not pose the dramatic and immediate threat to Yukon North Slope landscapes and Inuvialuit traditional use that coastal erosion does, the potential for slumping of ice rich terrain to impact local ecosystems warrants further research and monitoring. Of particular concern is the impact that permafrost thaw slumps have on adjacent stream systems, where increases in solute and sediment delivery can significantly alter stream food webs or impact fish spawning beds. Inuvialuit land-users have also expressed concern over the impact slumping may have on other landscape values, such as grizzly bear den sites or caribou movement routes. The report emphasizes the value of monitoring in addressing this gap.

Linked to discussions of coastal erosion and inland permafrost slumping are the significant changes that are occurring in arctic river systems. Changes in precipitation, runoff, ice melt, and ground cover all directly influence arctic rivers and their aquatic residents. Inuvialuit land-users have identified impacts to river systems a source of concern for fish habitat, land-user travel, and even observe changing river conditions as an impediment for the Porcupine Caribou Herd. As with related themes, a monitoring framework that is able to track these climate-driven changes on waterways of high traditional and ecological value is recommended.

To find out more about the climate change research landscape on the Yukon North Slope, download the new report below. We hope you find it helpful and insightful. If you or your organization is keen on conducting research on the Yukon North Slope or collaborating with WMAC (NS), please get in touch. You can also check out our Research and Resources pages for more about work that's been done in our region and how to go about research in this special corner of the world.